Sixty percent of 12th graders do not view regular marijuana use as harmful: NIDA

The percentage of high-schoolers who see great risk from being regular marijuana users has dropped dramatically in the past 10 years, according to this year’s Monitoring the Future (MTF) survey, which measures drug use and attitudes among the nation’s eighth-, 10th-, and 12th-graders. The change in attitudes is reflected in continued high rates of marijuana use in all three grades and could predict higher use in future years, based upon past MTF data (PDF, 209KB) showing an association between softening attitudes and increased use of marijuana. 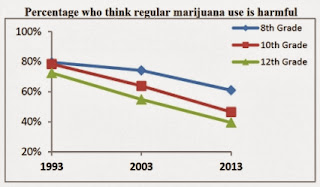 The survey reports that 39.5 percent of 12th graders view regular marijuana use as harmful, down from last year’s rate of 44.1 percent, and considerably lower than rates from the last two decades.
The rates of marijuana use have also shown significant changes in the past two decades, with 6.5 percent of seniors smoking marijuana daily compared to 6 percent in 2003 and 2.4 percent in 1993.

“This is not just an issue of increased daily use,” said NIDA Director Nora D. Volkow, M.D. “It is important to remember that over the past two decades, levels of THC – the main psychoactive ingredient in marijuana – have gone up a great deal, from 3.75 percent in 1995 to an average of 15 percent in today’s marijuana cigarettes. Daily use today can have stronger effects on a developing teen brain than it did 10 or 20 years ago.”

“We should be extremely concerned that 12 percent of 13- to 14-year-olds are using marijuana,” Volkow added. “The children whose experimentation leads to regular use are setting themselves up for declines in IQ and diminished ability for success in life.”

“These increases in marijuana use over the past few years are a serious setback in our nation’s efforts to raise a healthy generation of young people,” said Gil Kerlikowske, director of National Drug Control Policy. “Teens deserve to grow up in an environment where they are prepared to meet the challenges of the 21st century, and drug use never factors into that equation. Today’s news demands that all of us recommit to bolstering the vital role prevention and involved parenting play in keeping young people safe, strong, and ready to succeed.”