From CU NewsCorp as reported in the Boulder Daily Camera 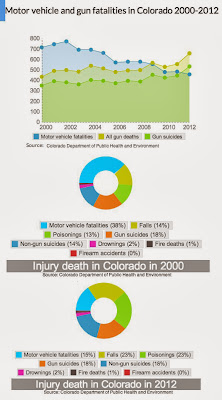 Gun deaths have outpaced motor vehicle fatalities in Colorado since 2009, but data from the Colorado Department of Public Health and Environment indicate the state has passed yet another milestone in death statistics.
For the first time in 2012, suicides by firearm alone surpassed motor vehicle fatalities, with 457 Coloradans dying in fatal car crashes and 532 taking their own lives using guns.
Gun suicides experienced their biggest increase in the past 12 years between 2011 and 2012, jumping up nearly 20 percent. Experts say many of these deaths are preventable, but that prevention requires framing suicide as a public health issue, not an insular problem.


"In motor vehicle accidents, the type of intervention is clear. I think in suicide it is less clear in regards to that policy question," said Shannon Breitzman, director of the Injury, Suicide and Violence Prevention Branch of the Colorado Department of Public Health and Environment.
Colorado ranks 32nd in the nation for traffic fatalities per miles traveled, according to 2009 numbers from the U.S. Census Bureau. Yet Colorado has the eighth-highest suicide rate per capita, according to the American Foundation for Suicide Prevention.
All states with higher rates of suicide also are located in the American West.
"In these Western states, you pull yourself up by your bootstraps," Breitzman said. "There is a lot of value placed on being independent instead of being interdependent."
While the reasons for the prevalence of suicide in the region are not completely understood, research by the University of Nevada suggests that residents in the West experience isolation more often, either because of sparser population density or because of the number of transplants who leave their families and social networks behind to move to the West.
Higher levels of gun ownership also have been linked to increased rates of suicides. But gun prevalence itself is an estimate commonly created on the basis of a state's suicide numbers because better statistics on gun ownership and use are often unavailable.
Public health issue
Jeff Michael, associate administrator for research and program development at the National Highway Traffic Safety Administration, said the successful reduction of traffic fatalities was achieved by database-driven approaches and strict science-based methodology.
"The success over the long run is a combination of many factors. Cars have gotten much, much safer over the years," Michael said. "Another part of it is obviously changing behaviors and even attitudes."
Michael said mandatory seat belt laws increased the number of Americans using safety belts from 20 percent to 60 percent, and that high-visibility policing and media campaigns did their part to push usage up into the range of 70 percent to 80 percent, saving the lives of many Americans.
Of all Coloradans who died from accidental, violent or self-inflicted injuries in 2012, only about 12 percent lost their lives in car accidents. That percentage was more than twice as high in 2000.
Despite strides made in traffic safety, injury death is on the rise in Colorado.
The fastest rising causes of injury death in the state, in order of percentage increase, are poisonings, which includes drug overdoses; fatal falls, which predominantly affect the state's growing senior population; and suicides.
In 2012, 673 people died from poisoning or drug overdose, 679 sustained fatal injuries from a fall, and 1,053 died from suicide, a nearly 44 percent increase since 2000 -- adjusted for Colorado's population growth.
Gun suicides didn't take the biggest chunk of the increase. Fatal, self-inflicted gunshot wounds increased by nearly 29 percent while suicides by other means increased by nearly 64 percent. Gun-related and non-gun-related suicides are approximately equally common. While other types of suicide increased most rapidly between the years 2000 and 2001, gun suicides experienced their biggest jump between 2011 and 2012.
Public health official Breitzman said suicide prevention strategies targeting the public rather than individuals still are in their infancy.
"People are taking medications that are not prescribed to them. It's on everybody's radar screen, everybody sees it as a huge problem. We feel like we have a lot of traction. Older adult falls -- same thing," Breitzman said. "The suicide issue is one that is harder for people to talk about. It's something people feel like they cannot influence, but that's not true.
Breitzman said that mandatory suicide prevention training for teachers and medical professionals could be a way to recognize signs of suicide earlier. Until then, means restriction, especially in the case of gun suicides, remains one of the few viable options.
"People do not want to die, they want to end their pain," Breitzman said. "A suicidal crisis is very short lived, about 72 hours. If you can intervene at some point and remove either the means and/or offer resources, then you can prevent suicide."
'Tool of their trade'
Douglas County Coroner Lora Thomas agreed that removing guns temporarily from a suicidal person was a step that shows friends or family members cared. Douglas County has experienced trends of decreased traffic fatalities and increased suicide rates since 2000 that mirror those of the state as a whole.
But Thomas, who spent six years as an independent contractor researching suicide for the National Violent Death Reporting System, added that policy actions should not interfere with the right to use firearms.
"We have to learn how to use them safely," Thomas said.
Thomas said familiarity is as big a factor as availability when people attempt suicide.
"People often use a tool of their trade to take their life," she said. "It might be availability, but it is also familiarity."
Gun suicide affects men disproportionately. In 2012, for every female Coloradan, three male Coloradans died by suicide. For gun-related suicides, this number rises to seven males per female.
"Men have higher rates of gun ownership," Breitzman said. "They use them more."
Breitzman added that expressions such as "attempting suicide" and "successful suicide" help explain the rates of male gun suicides.
"Men are expected to be successful. It's not acceptable for men to really attempt something," she said.
Experts Breitzman and Thomas agreed that gun suicide, like all suicide, has a multitude of causes and many prevention strategies, none of which should be disregarded.
"For people on either side of the issue, it's still an either-or approach," Breitzman said.
Posted by Unknown at 12:40 PM