Prescription Drug Abuse: More than Half of States Score 6 or Less out of 10 on New Policy Report Card, While Drug Overdose Deaths Doubled in 29 States in the Last Decade

A new report, Prescription Drug Abuse: Strategies to Stop the Epidemic finds that 28 states and 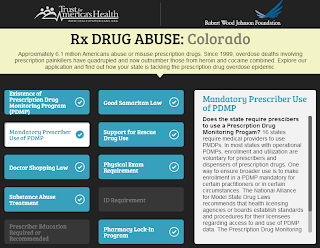 Washington, D.C. scored six or less out of 10 possible indicators of promising strategies to help curb prescription drug abuse. An interactive infographic allows viewers to select individual states. Colorado ranked higher than average with 8 out of 10 indicators in place.*

According to the report by the Trust for America’s Health (TFAH), prescription drug abuse has quickly become a top public health concern, as the number of drug overdose deaths – a majority of which are from prescription drugs – doubled in 29 states since 1999. The rates quadrupled in four of these states and tripled in 10 more of these states.

In the Prescription Drug Abuse report, TFAH – in consultation with a number of public health, clinical, injury prevention, law enforcement and community organization experts – reviewed a range of national recommendations and examined a set of 10 indicators of strategies being used in states to help curb the epidemic. There are indications that some of these efforts and strategies may be having a positive impact -- the number of Americans abusing prescription drugs decreased from 7 million in 2010 to 6.1 in 2011, according to the National Survey on Drug Use and Health.

*Even if the indicator only applies to Worker's Compensation or Medicaid rules, the state was still identified as having an promising strategy in place. Sadly, this is true for many of the indicators that led to Colorado's high score. For example, though prescribers are required to use the Prescription Drug Monitoring Program for Worker's Compensation patients, this best practice is not in place to protect the majority of Coloradans.
Posted by Unknown at 9:00 AM