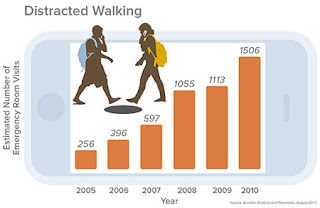 Pedestrian injuries are on the rise, and distracted drivers aren't necessarily the cause.

According to research from Ohio State University, the pedestrians are causing many of their own injuries due to walking while talking on the phone: distracted walking.

Young pedestrians aged 16-25 were at greatest risk for being injured while talking on a cell phone. Walking while talking on a cell phone resulted in more injuries than texting while walking, but the researchers believe fewer people text than talk while walking. Recent AAA research showed that talking, even on a hands-free device, was a dangerous cognitive distraction in traffic.

The researcher believes the best way to lower this injury rate is to start changing cell phone use norms, starting with parents.

Researcher Jack Nasar says “parents already teach their children to look both ways when crossing the street. They should also teach them to put away their cell phone when walking, particularly when crossing a street.”

Read more about this research from Ohio State University.
Posted by Unknown at 8:38 AM